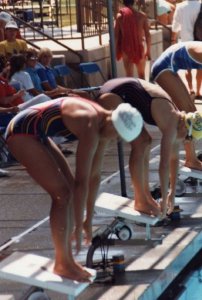 This week, I got a bit of sticker shock. With many of my pantry products low, I shopped more robustly at my grocer of choice, where “real food” is sold (for a full definition, or at least what I mean when I use that phrase, I suggest Michael Pollan’s writings on this subject). And my pocketbook felt it.

Still, the cost of eating this week will be lower than in the past, when we would eat out 3 times more a week and would be less deliberate in our grocery shopping. I remind myself of that when the final total appears on the check out screen. Gulp.

The even greater benefit is the time we have gained as a family. A good 4-5 times a week, all three of us still in the house are cooking together and eating together. We are talking. We are listening. It has bought us an hour or more of time together each day. That’s huge, in this plugged-in world where we crowd source more and more of our daily lives.

When I turned 12, I entered a new world. An avid summer league swimmer, my mother took me to a year round swimming program to try it out. Long story short, it stuck. I had some talent. I had a great deal of drive. Together, these attributes combined to pave the way for a 12-year competitive swimming career.

It was not a career without ups and downs. I never hated the sport, but I did hate what I allowed the swimming culture to do to me. Perhaps that is not even fair. There was a culture of overworking, over-swimming, that I glommed on to. It fit my personality so well. That culture became my culture. It fed me and destroyed me.

A perfectly trim swimmer at age 12, I started to notice I was less trim than some. And that simply would not do. Everything is a competition, right? A few thoughtless but not intentionally unkind comments about perhaps losing five pounds stuck in my brain like glue.

Problem was, food was central to my life. I was not a candidate for anorexia. Try though I did, self-starvation was simply not something I could do. However, I was a candidate for bulimia. Bingo! From age 13, through my swimming career, I was an untreated bulimic or a treated one with numerous bouts of relapse.

There were great parts of my swimming career, despite this disease. I loved my teammates, I loved the actual activity of swimming (more in practice than in meets, but that goes to my personal discontent more than anything else), I had the greatest college coach for my personality I could ever have had, and it paid my way to a fantastic five years (yes…five…) where I met my husband and made lifelong friends. Thank you, University of Georgia and the legendary Jack Bauerle for offering me only a half-scholarship. Penn State was my second pick but clearly the right place for me.

Of course, the disease of bulimia was never about swimming. It was a symptom of a discontent with myself, a symptom just like, though more severe than, my hiding of food under my bed when I was little. It likely would have surfaced had I been an artist or a writer or musician. It was a struggle I took well into my 30s. I credit God for finally releasing me of that discontent that manifested itself in food abuse.

Eating real food is real fun, as it turns out. I look forward to meals with just about the right amount of enthusiasm—not obsessive but anticipating the celebration of a tasty meal with my family.

It is also an amazing release to be satisfied with, or at least not antagonistic to, my physical self. This is me. I am very healthy; I still swim (though winter seems to make me physically incapable of driving to the pool) and have a resting heart rate of 50. I’m good.

I’m even better now that I care about what I eat. I’ve made things I would never have eaten—an amazing arugula pizza and not so amazing turnips. But trying new things, things from a garden, things that still have dirt on them when I buy them, I like that.