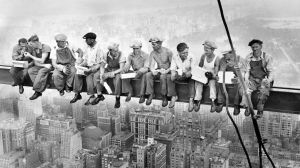 For a few years, I have been trying to formulate my thoughts around my abject hatred of the word “retirement.” I. Hate. It. Haven’t been able to articulate it why, though.

Today, however, I listened to Michael Hyatt’s recent podcast, in which he did a Q&A. Near the end of the podcast, he touched on his own loathing of the word “retirement.” In fact, the title of this podcast is “Why Retirement is a Terrible Idea.” Yes, yes! That’s it! It’s a terrible idea.

Why? Well, Michael explained it best. But his discussion with his co-host, Michele Cashatt helped me uncover why I hate the word, and the idea, of retirement.

Michael points out that the term was borne of a time when industry offered up the later-in-life “promised land” for workers who were undervalued and overworked. You work yourself to death in a job you don’t care about, and then you retire. Presumably to die.

Indeed, retirement is defined as “leaving one’s job and ceasing to work, typically upon reaching the normal age for leaving employment.” So I figured out my problem with this word. Ceasing work is never what we are called to do.

Let’s deconstruct that word, “work.” Work is defined generally as “activity involving mental or physical effort done in order to achieve a purpose or result.” So retiring from work is stopping activity for any purpose or result. It is death, really, or at least catatonia in front of bad daytime TV.

Work gets such a bad rap. But work is what we do before we feel achievement. Work is the meaning behind the word “liturgy,” a formula upon which religious worship is based. “Work it” is a phrase that means you are trying to get something (even if that something might not be the same to everyone reading this . . .)

When I hear someone say, “I can’t wait to retire,” it usually means they hate their paid job and shouldn’t be working it (or complaining to me about it, but that’s another blog post altogether).

Work is an effort to achieve a result. What result are you working to achieve?

2 thoughts on “Tired of Retired”